My Software April 7, 2019
Summary: these are a few of my favorite things

I must apologize: I originally had an epic (at least in my mind) post (or even series of posts) that I was planning to write about a really cool (at least I think) project that I’ve begun. However, I will not be posting about it because:

So, without further ado, I present you the low hanging fruit of any computer-related blog: a post about my personal software recommendations based on what I like to use!

Those of you know know me probably know that I mainly use Debian Linux, so these recommendations are obviously going to be fairly Linux-centric. If you don’t use Linux, you are probably either:

I’ll split this post by software type so that it’s easier to navigate.

Like most computer nerds, I spend a lot of time in the terminal, so it’s nice to customize things a bit and get cozy. (Actually, I once made an attempt to put my configuration/dotfiles online, but they’re now somewhat outdated.) I’m sorry, Bryan, but I still use bash, mostly because I can’t be bothered to change my ways. That being said, I do highly recommend tmux, a terminal multiplexer. tmux allows you to split your terminal into multiple panes, which is really nice for productivity. Plus, it makes me feel like a legit hacker. (Yes, I am well aware of the timestamp in the screenshot below. Stop judging me.) 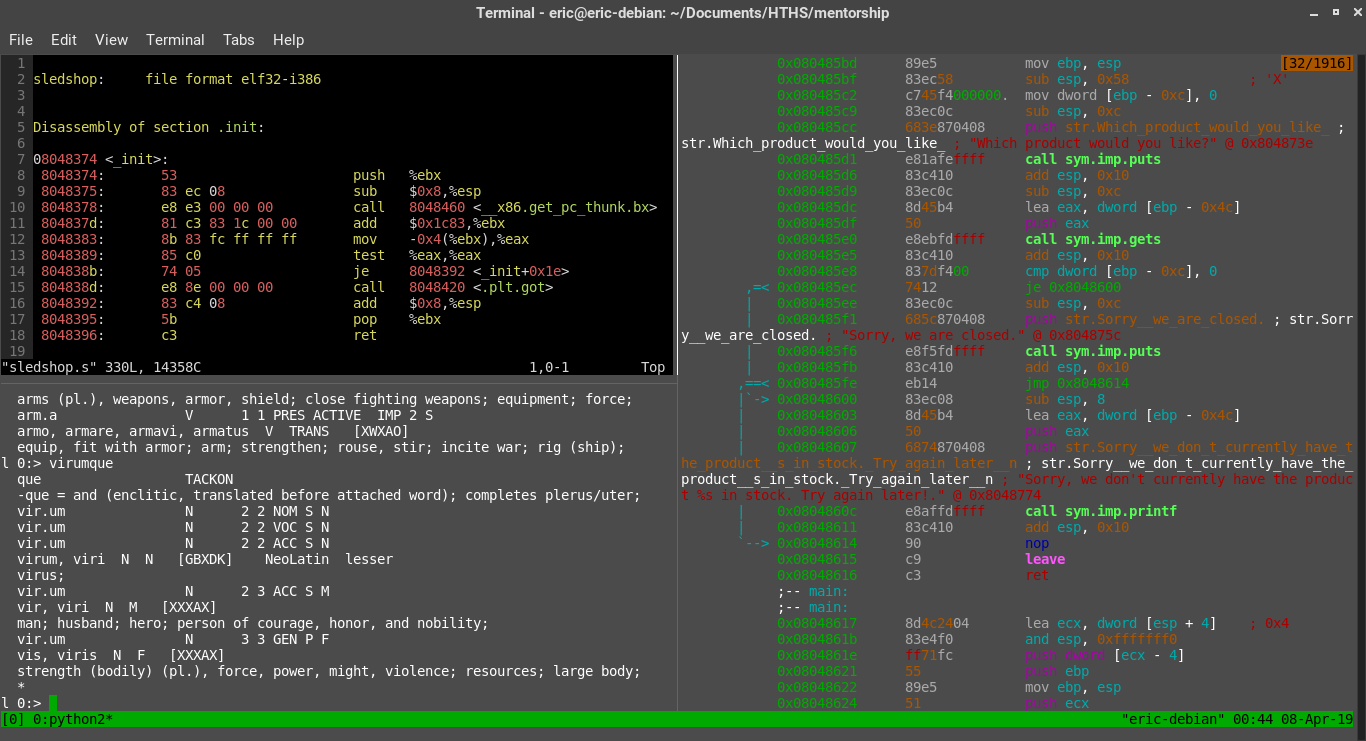 I haven’t found much need for conventional word processing software, but LibreOffice has suited me well on the rare occassions that I’ve needed it. Generally, I work on either: 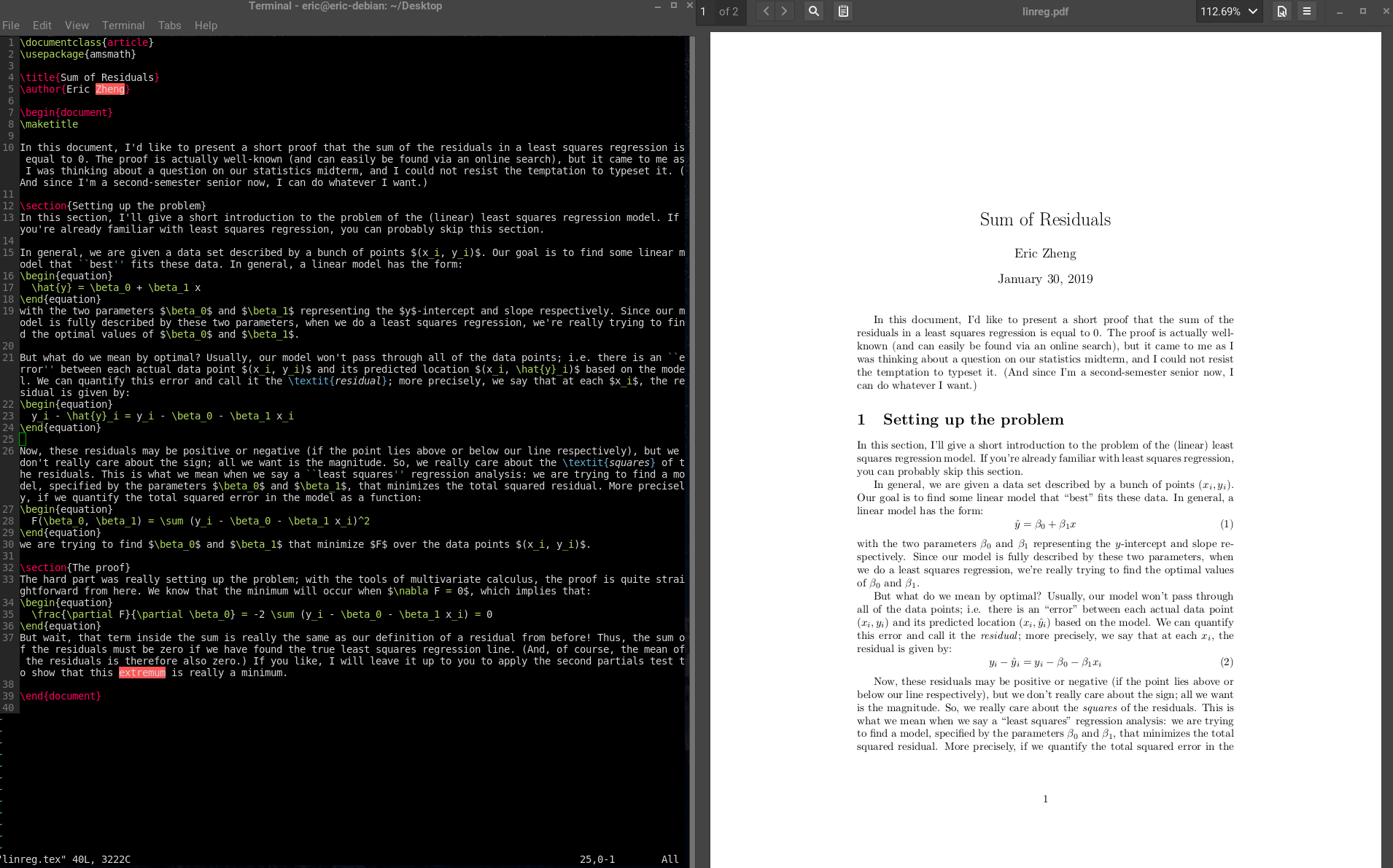 Since I like to hop around a lot, mostly work on small-ish projects, and don’t like very heavyweight toolchains, I generally dislike big IDEs. Honestly, I’ve found even a text editor like Atom to be rather cumbersome (I don’t like the bloat of having to fire up Electron every time I want to write something.) I mostly write code in Vim, which is a notoriously difficult to use yet extremely lightweight editor. (Hey, at least it’s not ed!) Actually, I happen to be typing this post in Vim. I’m not particularly good with it yet, but it’s getting to the point where it’s actually pleasant to use.

For the actual compilation/execution of software, I stick to your traditional command-line compilers/interpreters: good old gcc for C, ghc for Haskell, etc. Like 90% of software developers under a certain age, I mostly manage code with git. I used to run a personal git server for things I didn’t want to put on Github until my AWS free tier trial expired.

For some more specialized software domains: 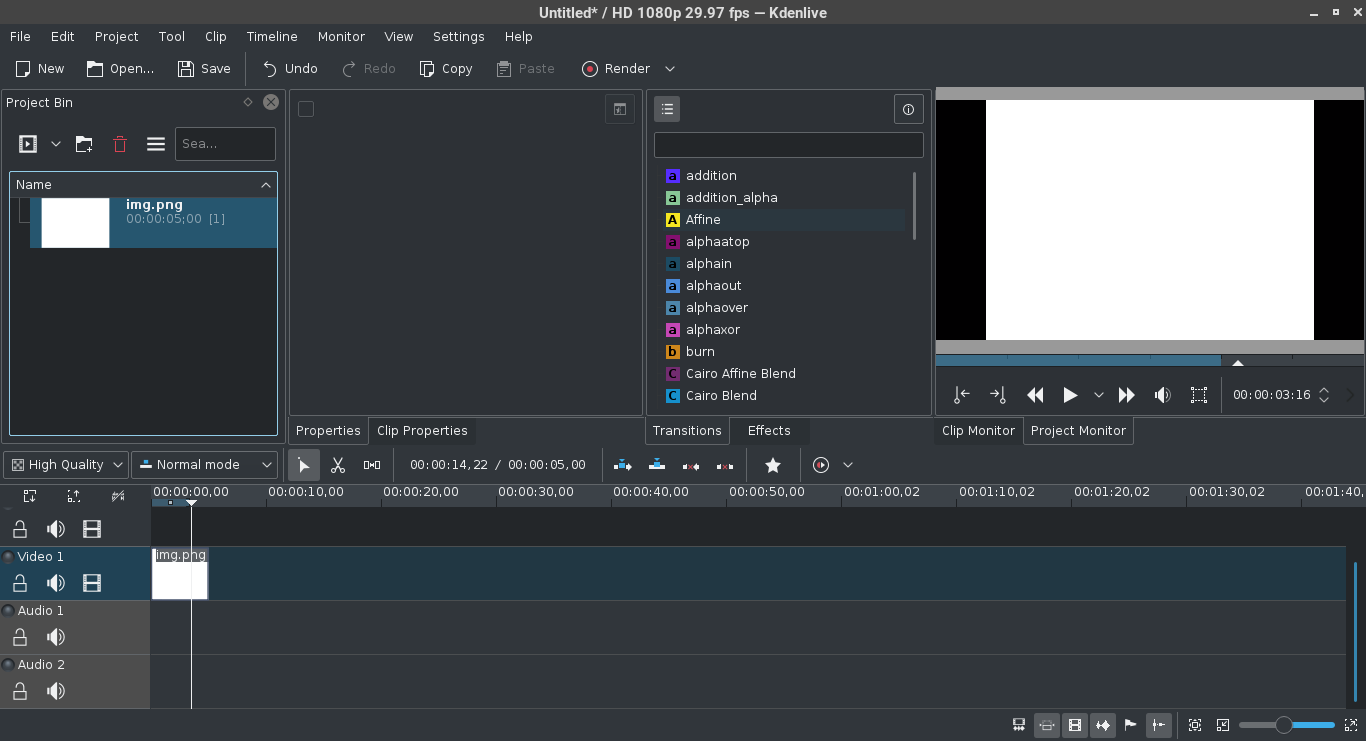 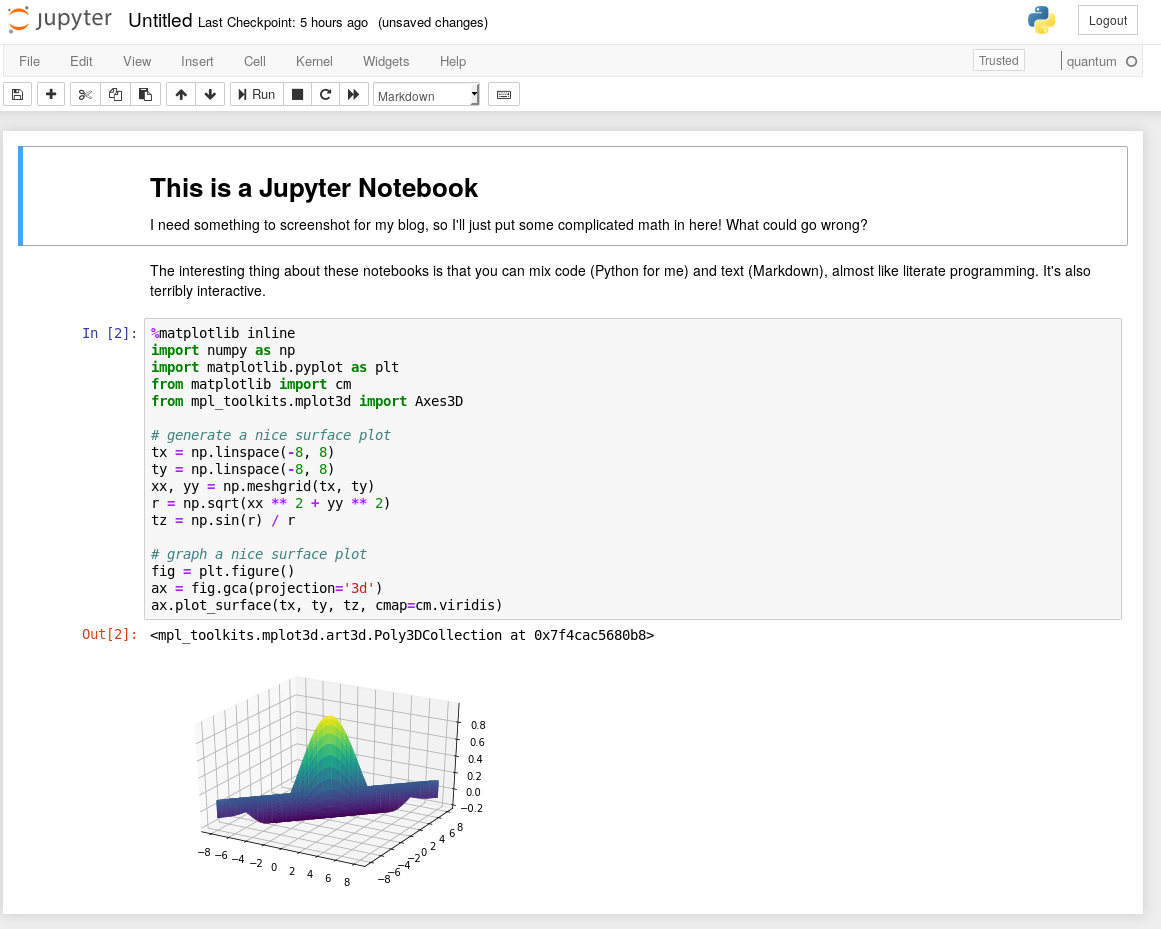 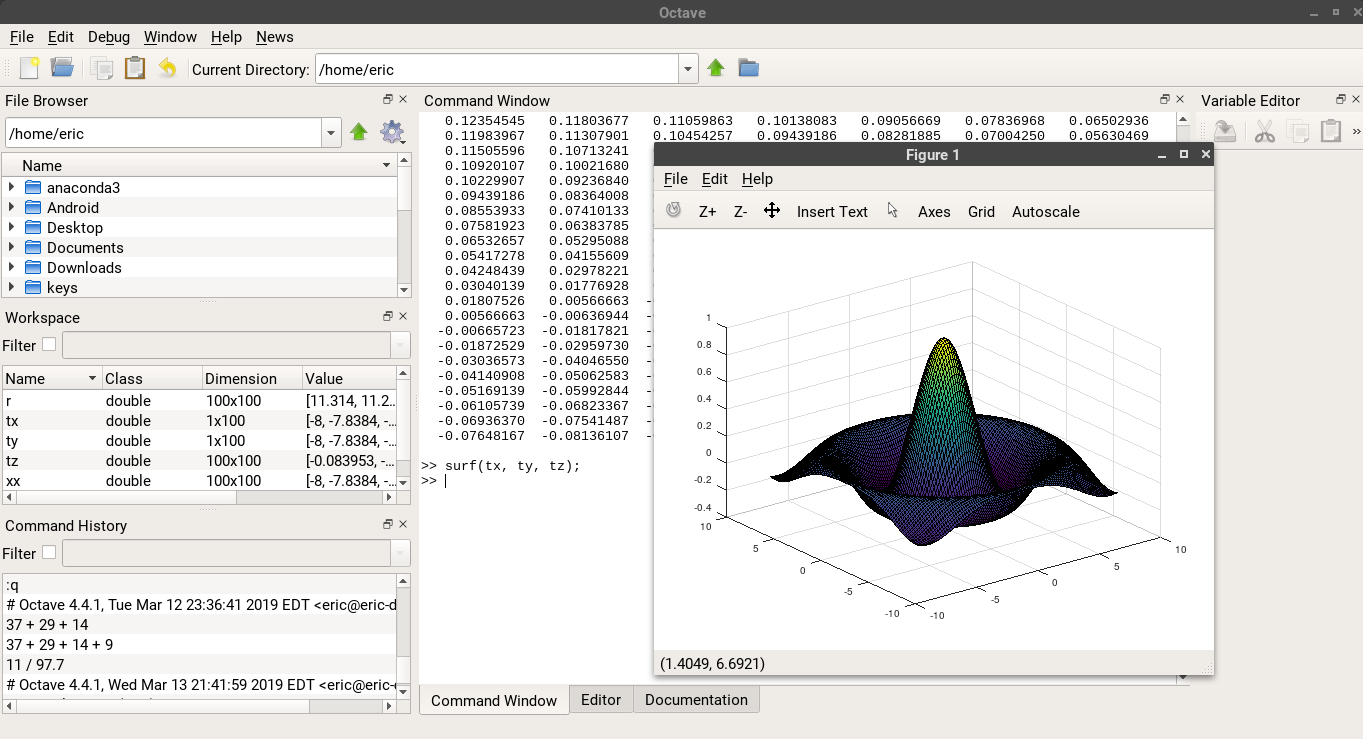 Honestly, that’s about it. If you’re up for a change or liked anything I shared in this post, I would encourage you to try it. If you have any recommendations for me (whether it be GNOME extensions, command line clients, or anything else), I’d love to hear them. (And no, Sam Alws, “use dwm” does not count as a valid suggestion.)

As always, I have an update after grading is over: I’ve finally decided to spruce up my terminal with some stylish themes/messing around with $PS1. You can see the results of my effort below, and you can try it out for yourself here. 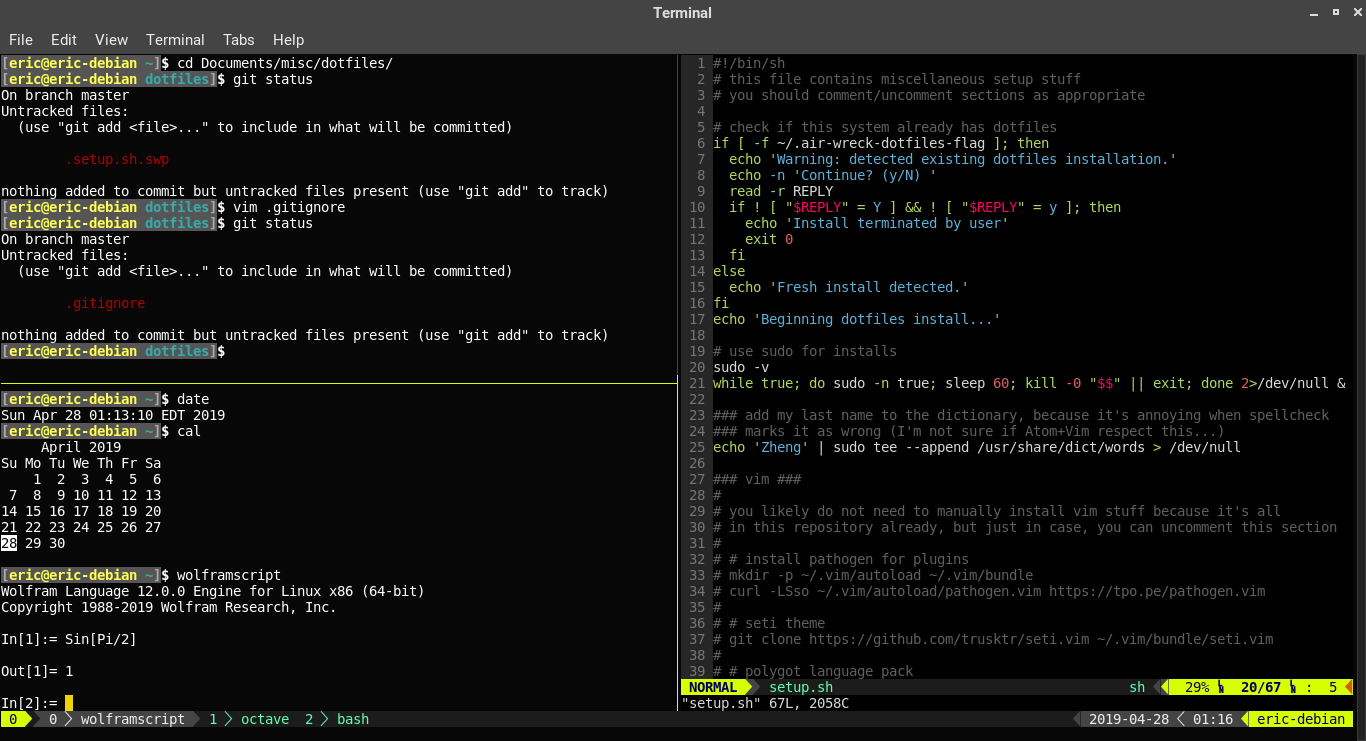 Also, with regard to scientific computing, I noticed that I can get Mathematica for free from my university, so I went ahead and tried it. My first impressions are extremely positive; besides its obvious strength in symbolic computing, I was shocked by the sophistication of the built-in natural language processing. I’ll probably mostly stick to my current Python stack, but this is a really neat tool to have. I can tell Mathematica in plain English to plot a function, get the current price of Bitcoin, and even easily get the current coordinates of the nearest GPS satellite! 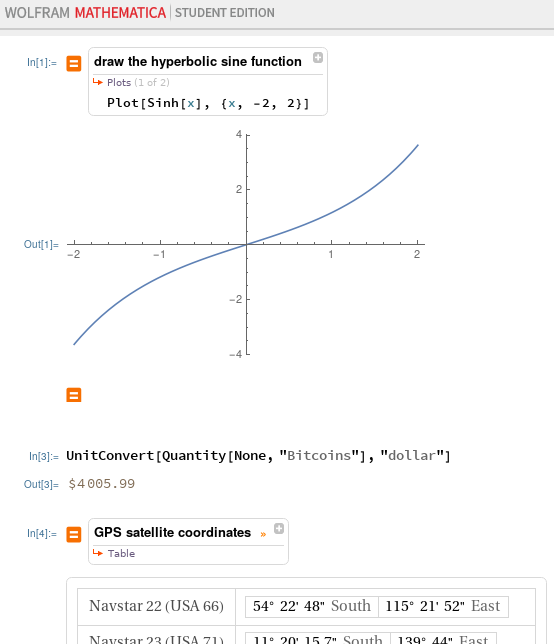